Race through each level while collecting as many fish as you can. But hurry! An avalanche of snow is fast approaching! Don't let the avalanche topple over you. You must reach the ice hut at the end of each level with at least 10 fish before the avalanche reaches you. To help you, collecting a spinning orb in each level will give you the ability to slide across the snow!

NOTE: This game is still under active development. Current release is not fully functional. 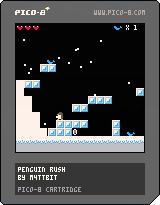